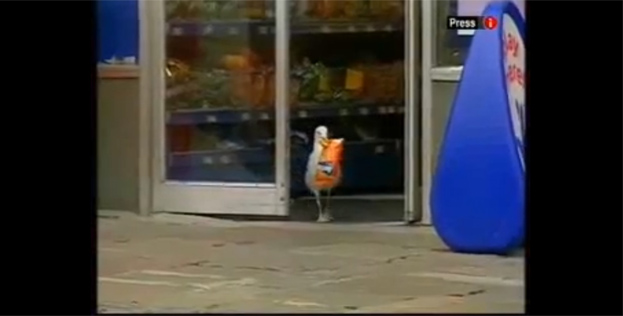 Bag-snatching foxes, cat burglars, shoplifting seagulls…These furry lawbreakers are a whisker away from making you their next victim… 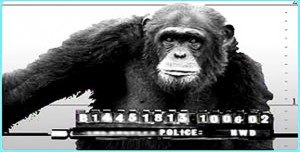 Monkey business
Mustapha Riat always left his window open for his cat to go in and out, in Hackney, east London.
But one night in 2002, he woke to see a monkey climbing into his room and stealing his mobile phone.
‘I saw this chimp with long arms coming through my window,’ recalls Mustapha. ‘I thought it was going to bite me.’
Surprised officers were called and forensics confirmed there was no evidence of a human at the crime scene.
The chimp was also a suspect for the theft of a DVD player from a house down the street.
Police think he could have been part of a gang, trained by a devious human ringleader.

Sly as a fox
West Sussex woman Angela Clark was sitting in a car park back in 2009 when a fox, who’d been watching her, came up, stole her handbag and fled.
Astonishingly, a short while later, the ‘guilty-looking’ fox returned with the bag and dropped it at her feet, before running away again.

The gull of it
When Sam the seagull felt peckish he’d help himself to a bag of Tangy Cheese Doritos from a newsagent’s in Aberdeen.

Every day in 2007, he’d boldly walk in and grab a bag, carry it off and hammer it with his beak, until his snack came out. He’d nabbed over 20 bags before he was stopped.

Bee gone
Scottish Beekeeper David Dickman saw his entire swarm served with an ASBO in 2009, after they repeatedly stung his next-door neighbours.

Dickman maintained they weren’t aggressive, a fact disputed by the Dyson family – especially after Mr Dyson who developed an allergy to one sting, leaving his hand twice its normal size.

Drunk as an elk

Two elks broke into a Dutch carehome, then got drunk and disorderly after tucking into some fermented apples.
Animal -loving police commissioner Bengt Hallberg insisted: ‘It’s better to get rid of the apples from the carehome, than kill the elks.’

Keepers at London Zoo were forced to take action in 2011, after Bolivian squirrel monkeys started stealing designer sunglasses off the heads of visitors. Staff coated a section of the glasses with a bitter tasting apple substance, hoping it would be so unpleasant their thieving tendencies would stop.

Kleptomani-cat
When items go missing in Luton, Lesley Newman expects a knock on the door.
Her pilfering puss Denis’s crime spree has seen him nab boxer shorts, shoes, t-shirts, cardigans, dozens of socks, paintbrushes, a football, dolls, and a thong!
His biggest haul to date has been a bath towel.

Hospital drama
Patients in a Delhi hospital in 2011 were terrorised by group of rampaging rhesus macaque monkeys who broke in after learning to operate the automatic doors.
Food was stolen, staff attacked and medical equipment played with.
Staff ‘hired’ larger grey langur monkeys to scare them off.

Crash, bang, wallaby!
In May 2002, a 53-year-old woman in Henley-On-Thames called police after she found a smashed window in her flat.

Believing she’d been broken into, police took blood from the window for DNA testing. They found, to their amazement, a wallaby had gained entry.
Police believe the marsupial fell through the window into the basement – then hopped it.

A thief in Germany was caught red-handed when his canine companion couldn’t tear himself away from a string of sausages in the butcher’s shop they were raiding.

< Prev Crazy baby names
Next > Beat the half ter...